You are here: Home » Blog » LIFESTYLE » Love » 7 Things We’ve Learned about Having a Strong Relationship in 7 years
This post may contain affiliate links. Please see my full Disclosure Policy for details.

This weekend, my husband and I celebrated 7 years together {yes, we still celebrate our dating anniversary}, and it got me thinking about how how far we have come as a couple. Bryan and I did not have the smoothest start. We were transitioning from friends to a couple, which meant there were a lot of people who had opinions about it. For some reason, those people thought they had a right to voice said opinions, which was stressful. It was like starting a relationship in a fish bowl. Then, add in some left over baggage and very different communication styles.

We were best friends though. It was a great foundation to have, and, seven years later, we are stronger for all of our challenges and differences. It doesn’t magically happen though.I’m not saying we are experts. Far from it. We have been together 7 years, married for only 2.5 of them. I am saying that we have learned what makes us stronger through graduate school, dramatic job losses and changes, moving 8 times, family issues and more. We have been through a lot of rough patches.

We know 3 couples who divorced before the 2 year mark. These couples had been together for various amounts of time, spanning from 3 to 10 years. Their divorces made a huge impact on us. We made the decision to make it, to work at our relationship so that we didn’t meet the same fate.

So here are 7 things learned about having a strong relationship in our 7 years together. 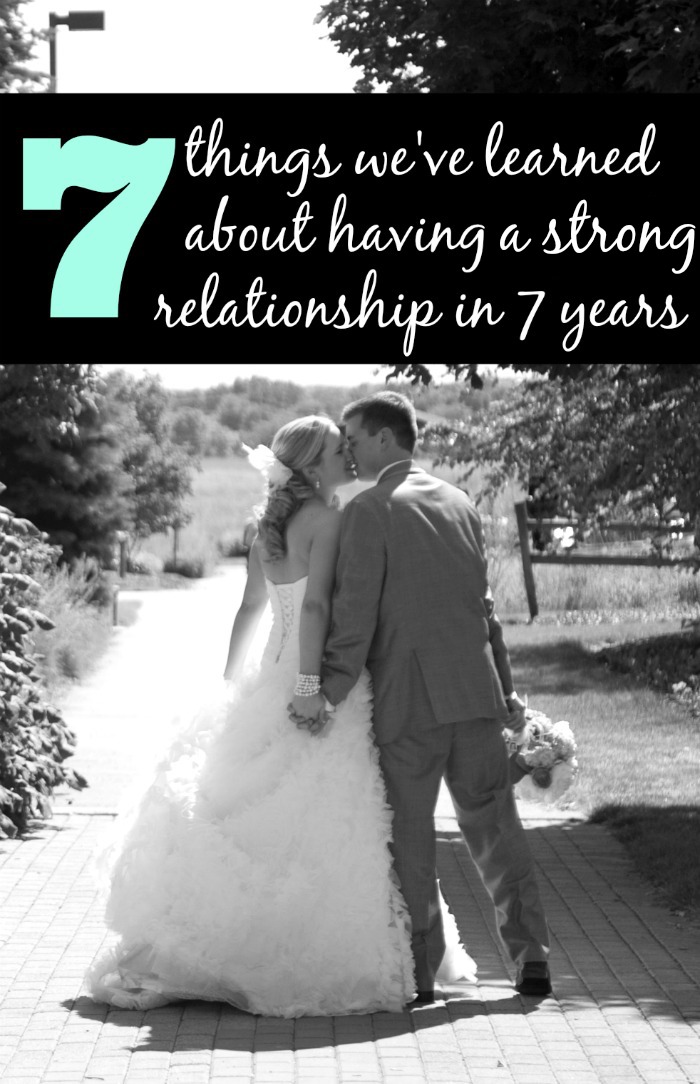 LOVE AND HAPPINESS IS A CHOICE.  As a whole, I am against the idea of “falling” in love. It makes it seem like love is something that happens to us, like we have no control. Even more so, I am against the idea of falling OUT of love. We are not helpless victims. When I chose to go on a date with Bryan 7 years ago, I made a deliberate choice. I knew then that this would be different from previous relationships. He was already my best friend, the person I turned to when life was hard or laughed with over a horrible cutting of a cake incident. I made a choice. Every day, we make the same choice. People can’t just wait around for love to happen to them or become lazy in their relationship. Love and happiness is a deliberate choice.

MAKING AN EFFORT IS NOT AN OPTION. IT”S NECESSARY.  This may seem rhetorical to my previous statement, but I think it needs saying. People have criticized us for scheduling time together, for saying no to cocktails because we had plans to watch a tv show together, for planning an elaborate date night just because or for even celebrating our dating anniversary. Don’t you know that we are married so it doesn’t matter anymore? People may find something else that works for them, but we find that when we make an effort  – any effort at all – we are happier and feel more connected.

Effort can mean various things though. For example, we usually sit down and have a “family meeting” every Sunday. Sometimes this lasts 2 minutes, sometimes an hour. Either way, we open dialogue and check in with one another about the upcoming week. I make an effort to cook a nice dinner when he’s had a busy day because I know food is one of his love languages. He makes an effort to give me a neck rub or sit next to me during a show because he knows affection is one of my love language. Or effort can be scheduling a date night at least once a month. Effort is necessary for a healthy marriage.

LOVE IS NOT ALL YOU NEED. If I really had to pick one thing, I’d go with patience and respect. Love will not magically prevent the little fights over dirty dishes or changing the toilet paper roll. It will not magically cure all at the end of a terrible, horrible, no good, very bad WEEK. But more importantly, it will also not magically complete you. The only person who can complete you is yourself. Relying only on “love” to fulfill every need will leave you disappointed.

WE ARE NOT THE FIGHT. This is a message that I have latched onto lately. We are both very sensitive people, and I found myself being overly harsh on myself if we had a fight. The words “I’m a bad wife” came out of my mouth on more than one occasion even though Bryan NEVER said that and I know I’m not. I actually thing I’m a pretty darn good wife, but those words would just come bursting out of my mouth when I was upset. I needed to get my head and mouth on straight.

Hence the mantra “we are not the fight”. Fights will pop up, and let’s be honest – most of them are stupid. On Friday night, we were overly tired and crabby, and the needed patience discussed above had disappeared. So we had a small fight about saying thank you fast enough. That’s right – saying thank you. Now – don’t be judgy. We have all had stupid fights that seem relevant at that time. The important thing is that moment when you realize “this is stupid and not significant.” That fight doesn’t define us. We stopped, said we were being stupid and apologized and went on to have a pleasant night.

EVERYONE WANTS TO BE LIKED. You might be busy. You might be pulling a 60 hour week while sick. Your partner still wants to know they are liked. This might be a lesson I learned as a teacher, but make sure you are always saying more positives than negatives. People wants to feel good about themselves and hear words of affirmation (another of my love languages). Even when something negative needs to be addressed, try to do so with a little grace. Or, let’s just go back to kindergarten and say “treat others the way you want to be treated.” 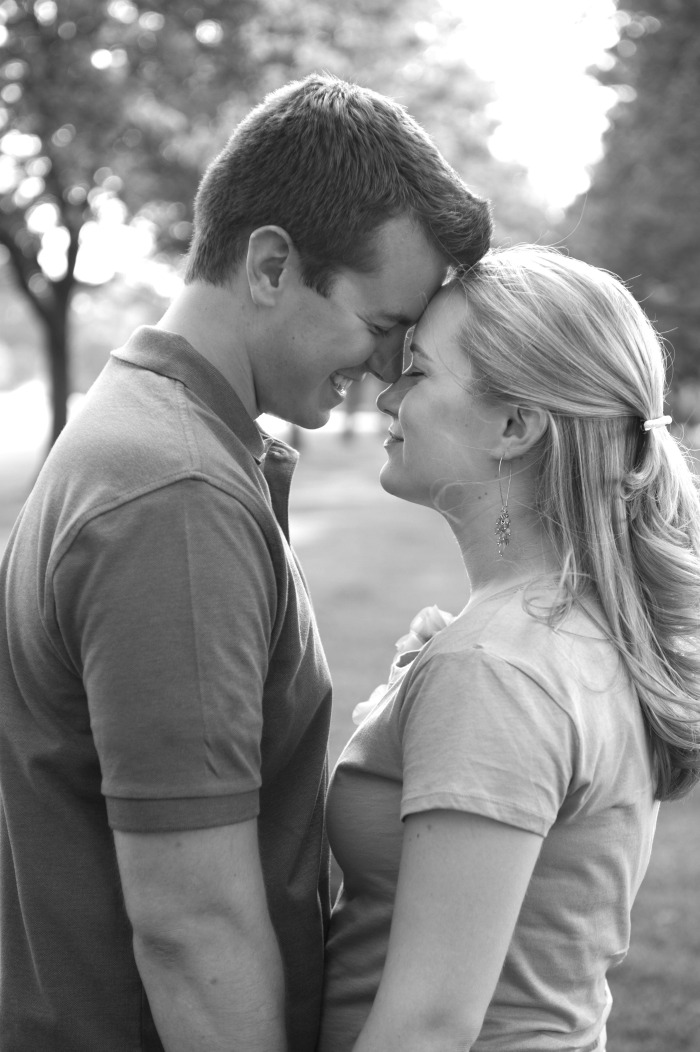 ASKING FOR EXTERNAL HELP DOES NOT MAKE YOU A FAILURE. So I’m going to let all of you in on some information that most people don’t know – Bryan and I went to a few counseling sessions. During the wedding planning process, some major family drama emerged. It was hard {understatement} and it was more than we had ever had to deal with before. Plus, Bryan was in grad school, I was feeling pressure from student teaching, and we were planning a wedding. We also had very different communication styles. I grew up in a family where loud disagreements were not uncommon at the dinner table; Bryan grew up in a household where most disagreements were held quietly behind closed doors. Neither bad, just different.

We made the decision that working through some of these pressures with a counselor would be good for us, and it was. We don’t talk about it a lot with others; Bryan was even unsure of this being mentioned on the blog. However, he decided it was okay because it was one of the best decisions we ever made, and, if one of you are thinking that counseling might help, we want to encourage you to give it a try. Remember, effort is essential to make a relationship work despite every obstacle that comes its way.

DIVORCE IS NOT AN OPTION. Now wait before you get the wrong idea. I’m not saying that divorce is inherently wrong. For many people, divorce is the only possible option for their happiness or even safety in the worst possible situations. I do not judge the decision people make for themselves. It’s just not a choice for us. This is the one area where I think our stubbornness is a true attribute. We don’t entertain the idea of divorce because we will not let our relationship fail.

What are your rules for a healthy relationship? What have you learned works for you? I want to know. 7 years in and I know we still have so much change and growth to come, especially when kids are added into the mix.

Connect with us here –>