You are here: Home » Blog » LIFESTYLE » Becoming a Mom Without a Mom – Grieving a Mother and a Grandmother
This post may contain affiliate links. Please see my full Disclosure Policy for details.

Living a reality that I never thought possible and grieving for both a mother and a grandmother as I became a Momless Mom.

It’s taken me awhile to write this post and then even longer to finally publish. Partially because I had been attempting (and somewhat failing) to take some time off for maternity leave and then the holidays. Partially because I am tired and have baby brain like most new moms which is making full sentences feel a bit harder than usual, especially for sentences that hold such emotional weight. But mostly because I wasn’t entirely sure what I wanted to say. I had a nagging feeling though, like I do with all of my difficult, more emotional posts, that I needed to share my story for myself – as a way to process – but also for my fellow Momless Moms. I’m not offering anything ground breaking. I certainly don’t have any solutions or wisdom just a few months into becoming a mom without a mom or just a mom in general. I can only offer my story, my friendship, and my love. A connection when maybe you feel alone.

I’ve talked in length on the blog and on social media about what kind of year 2016 has been with the loss of my mom. To sum it up in two words – living hell. New Year’s Eve was happily welcomed as I felt such a sense of relief to leave 2016 behind us. Yet surprisingly, I also felt a hard wave of unexpected grief when the clock struck midnight as I felt even more distance from Mom, realizing she would never see 2017. 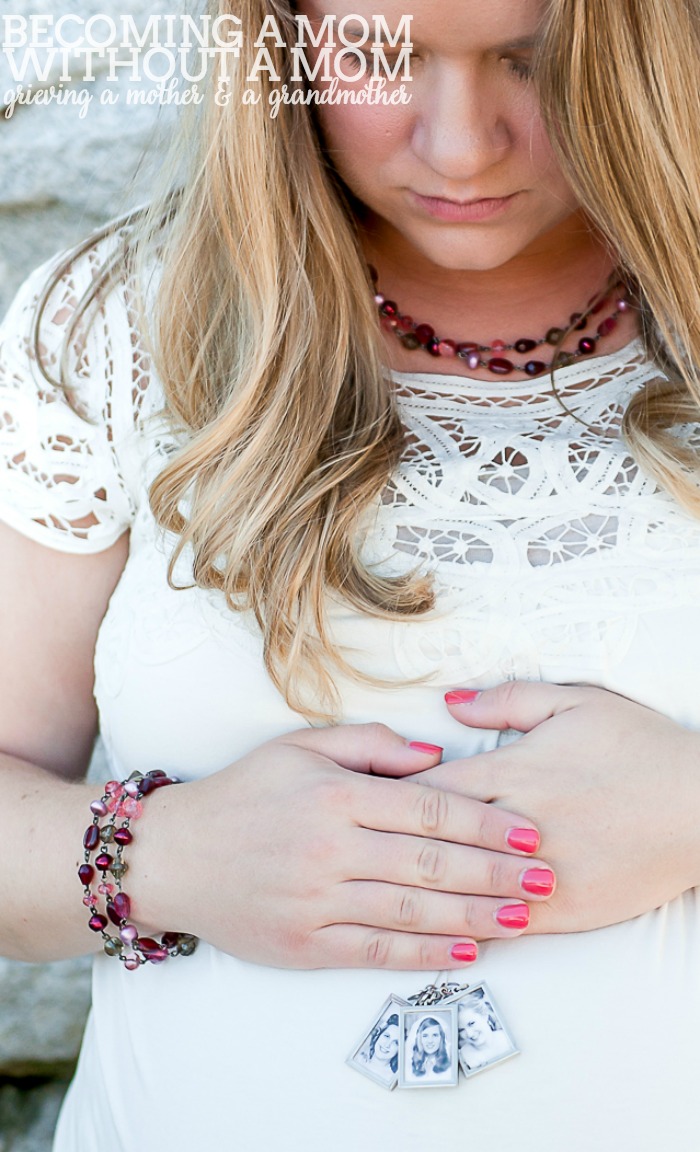 In December of 2015, we received positive news of my mom’s fight with Pancreatic Cancer. Her tumor had shrunk in half. We were winning. Even then, deep down, I knew we wouldn’t win and that pancreatic cancer would take her life. But we were winning at that moment, buying us time. Or so I thought. I thought we had at least a year, which was the feeling we had when my husband and I decided to try for a baby. It was one of the hardest decisions we ever made as a couple. We were still a little while away from our previously planned time to start trying, but Mom’s cancer put a different spin on everything.

We were lucky in that it didn’t take us long to get pregnant. We were elated, but that feeling began to diminish when I visited my parents on March 2nd. My mother’s stomach was extended, and because Bryan’s uncle had gone through something similar only a few months before, I had a pretty good idea what it was. The cancer had grown back and more … It didn’t matter that we got pregnant so quickly. It still wasn’t going to be enough time.

She was able to come home two days later, and my parents, Bryan and I had a very subdued birthday celebration at their home. I could see both the extreme joy and extreme fear in my mother’s eyes when we told her she was expecting her 6th grandchild. She said, “My baby’s having a baby” and called me “Little Mama.” I curled up on the couch with her that night; something I hadn’t done with her since she had been sick and in pain.

Two weeks later I sat on that same couch, knowing I could never curl up with her again. That I would never hear her call me her baby or Little Mama again. That she would never meet my children. And I was crushed. Never once in my life had I ever imagined that we would lose her so young. Her father is still alive into his 90s and her mother held on far longer than she herself wanted to. Never once did I ever think I would have children that never met her.

The proceeding days and weeks were filled with tasks. Making phone calls and visits to neighbors to tell them of her passing. Planning the funeral. Taking care of the business side of a death – banks, account names, emails, etc. Helping family grieve and processing together. Then doctor visits, apartment searching, and preparing for our move.

The weeks turned into months that were filled with even more tasks – settling into our new apartment, decorating the nursery, and at least twice weekly doctor visits for gestational diabetes.

My time and my grief were preoccupied with tasks. They kept me moving forward. Liam kept me moving forward because I wanted to experience the joy of this pregnancy. We had waited so long for the right time to have a baby, and while this wasn’t what we would have considered the “right time” anymore, we had still waited and wished and wanted. And I knew the risks from my doctors of sinking into depression between my hormones and my grief.

Basically, I was determined to follow my mother’s last request of me – “take care of yourself and take care of that baby.” 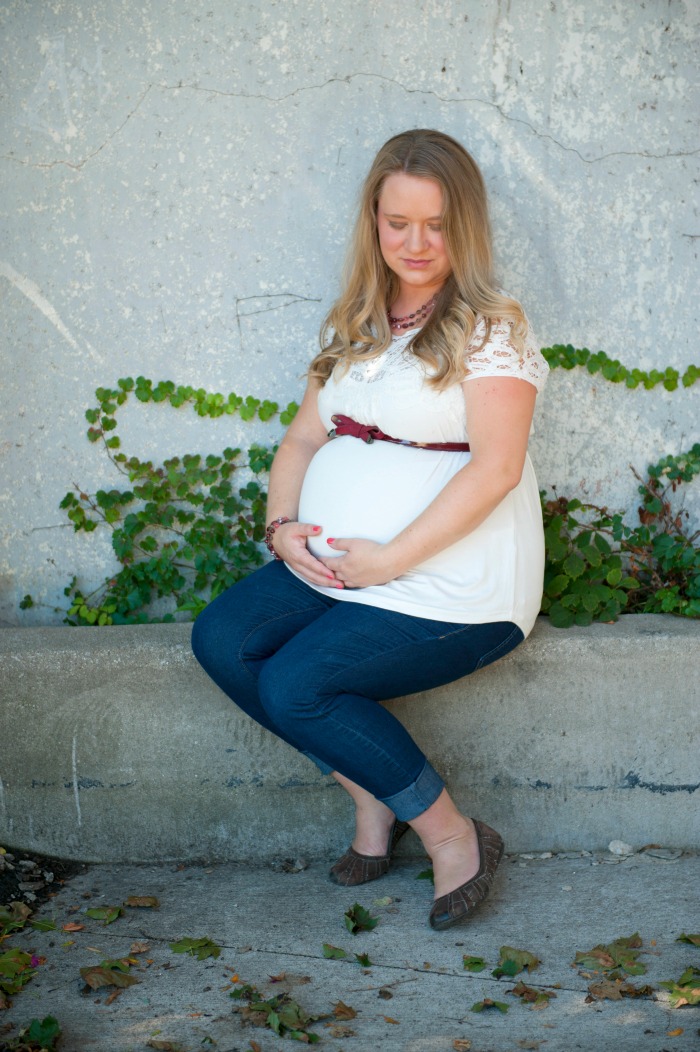 And now … Now Liam is 3 months old. I stare at his big blue eyes, his white blonde hair, his rounded chin, his adorable lips, his long monkey toes and his sweet little fingers as they hold mine and I can’t help thinking how much Mom would have loved him.

Now I’ve endured 5 nights in a row of no sleep, trying to figure out why my son suddenly won’t sleep on his back without crying out in pain (he has reflux). Now I’ve struggled to get him to go back to sleep even though I know he’s still tired. Now I’m sick for the first time as a mom and exhausted because he’s decided it’s a good time to sleep regress or have a growth spurt or something, keeping me up all night. Now I’ve sat for hours googling questions. Now I’ve experienced the weight of endless questions and doubts, and I can’t help but want to call Mommy. To hear her experience. To hear her support and reassuring.

Now I think of all the moments she got to experience with my nieces and nephew – baking cookies, napping on the couch together, watching old movies, teaching them to walk, to read, to swim, unwrapping her Mary Poppins gift bags, or going to Disney World, and I can’t help feeling a sharp pang of loss for Liam that deepens with every new moment missed. For all the experiences and love he will not have because she is gone. For all the moments I will not get to experience because she is gone. 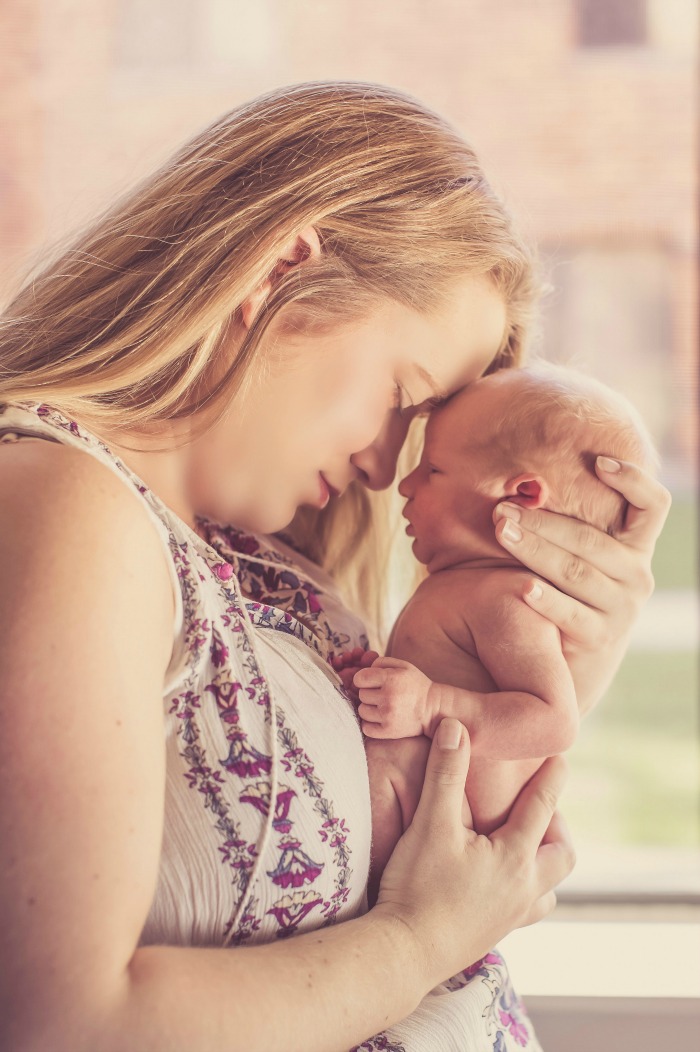 Becoming a Mom without a Mom is sort of like learning to play a game without your coach on the sideline. Yes, I have years of lessons and examples from being her daughter. Yes, I have similar traits and expressions. Yes, I have my sister to thankfully turn to and ask questions of. But I don’t have her. I don’t remember everything she ever told me. I wish I had thought to write it all down for the horrible inevitability of losing her, but I didn’t. I wish for so many things.

Being a Momless Mom is having part of you missing.

So why share all this? It’s sad, morose, defeatism and grief. But does it serve a purpose?

Carrie Fisher once said, “It creates community when you talk about private things.”

I love this quote from Carrie Fisher. So often we hide the darker, complicated emotions and we inevitably find ourselves isolated. So if you are also a Momless Mom or are sadly about to become one, I don’t want you to feel alone. You will probably look around and see your friends sharing pictures of their mom’s holding their children or hear them talking about how their mom came over to babysit or a myriad of other similar situations that will leave you feeling jealous or lonesome or overwhelmed. You might even be the only one of your close friends who have lost a mom or a parent. It doesn’t mean you are alone. You can comment here, you can email me, you can message me on The Love Nerds FB page. You are not alone. 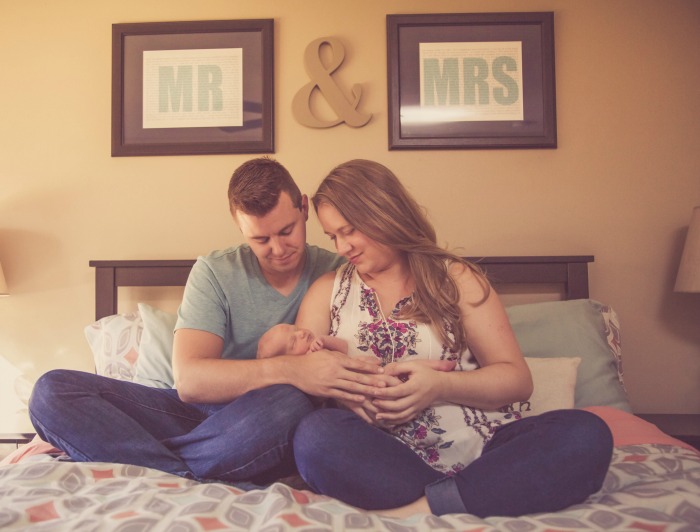 And if you know a Mom without a Mom, a couple random tips.

DIY Anniversary Journal
Books to Read Before They are Movies in 2017 (or Not!)