Maggie and I love video games. We both grew up playing, watching, and obsessing over video games.  While we enjoy different genres – Maggie is all about adventure, puzzles, and mystery while I’m a more of a shooter, action, platformer –  we always love finding a cooperative game to play together. This week is the Electronic Entertainment Expo (E3), which is THE big video game convention of the year. I went a few years ago when I was blogging for a video game review site, so I’ve been feeling nostalgic.

Maggie and I thought this would be the perfect time to recommend some games you could play with a special someone, a friend, or even some kids. We’ve definitely focused on two player games, but we’ve also included some games that are good for small groups.

: If you have ever played a Mario game, I guarantee you will enjoy this game. It builds seamlessly off of the original Mario, going from left to right and adding all the extra characters we’ve gone to love in other Mario games (Luigi, Peach, Toadstools, etc). It’s great for someone who hasn’t been around modern games a lot but has familiarity with older controls on the Nintendo Entertainment System (NES) and the Sega Genesis. There are some great power ups (cat suits, a boot, and the trusty fire flower) that keep gameplay fresh.

It’s definitely fun to play as a couple as it gets all types of nostalgia going and takes advantage of the higher resolution of the Wii U game console. It looks good, it plays well, and it is easy to learn.

NOTE: There is also a similar version for the original Wii if you have not upgraded systems – New Super Mario Bros. Wii

Mario Party and Mario Kart: Really, almost any Mario game ever is perfect for two players but these are our other two favorites. While you can certainly binge on both (we may or may not have played through all the Mario Kart levels in one day during our college years), these are really great for short bursts of time. You can play only a small round of Mario Kart, for example, and even play just the mini-games in Mario Party. Both are good for up to 4 players, too, making it fun for double date night, friends, or even kids!

ever: You might think I’m joking that I say any Lego game ever but the truth is that no matter what Lego game you pick out, you are going to immediately be hooked on getting those studs and touching everything in the world to see what it does.

For those unfamiliar, the Lego games hit almost every type of fandom that has a movie or TV show. Some examples include Indiana Jones

, Lord of the Rings

. These games take the fun parts of what is exciting about their particular subject area and make it easy to play. For example, you will be casting spells in Lego Harry Potter or throwing Batarangs in Batman.

We can’t recommend these games enough to people who think most video games are over complicated. Plus, the co-op function of these games is most times necessary – not just a throw in. Maggie and I have have good team building through these games and just about as many discussions of how to handle a puzzle. Our nieces are also obsessed with all of the Lego games!

Castle Crashers: Maggie and I may or may not have played this game two times through (and probably more) because we loved it so much. Castle Crashers is a 1-4 player side scrolling adventure that looks like its style was ripped from a coloring book. You can choose from various roles, weapons, and magic/abilities to cruise the game’s campaign full of different types of levels (flowing down a river, fighting up a mountain, and getting thrown into a gladiator type battlefield).

I recommend this game for couples because it’s not complicated, easy to learn and has a deep upgrade system that will constantly have you re-examining your items so you can dispatch more enemies than your partner. This is available online through Xbox Live Arcade and PlayStation Network right now. 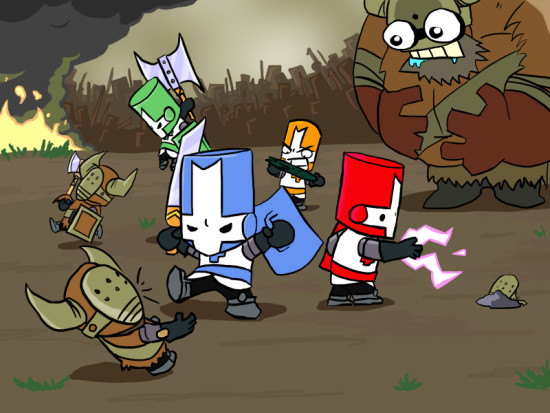 The bulk of the cooperative missions require you and your partner to manage a hazardous area and both get to the finish point together. This is a simple concept that soon gets complicated as the puzzles get harder. The game does an incredible job of exercising your brain in different ways and it really requires you to brainstorm together to solve the puzzles. I would not recommend this if at least one of you isn’t good at puzzles or at least doesn’t enjoy puzzles.

Injustice: Gods Among Us

: Do you ever get so frustrated with your friend, spouse, partner, husband, or wife that you wish you could just throw down like Superman and Batman? Now you can but in safer and more appropriate video game format. Injustice is a fighting game that is made by the same people that did the Mortal Kombat series (a very well-known fighting game), but now all the fighters are from famous comic books.

The game has over 25+ characters to choose from DC’s deep roster, such as Batman, Superman, Wonder Woman, the Joker, and Green Lantern, and has many recognizable arenas, such the Batcave, Metropolis, etc. The game is heavily reliant on combos, meaning that memorizing some button combinations will help you do heavy damage to your opponent. Because of this, Maggie and I started learning 2-3 characters that were good for our play style and more or less memorized the combinations.

The one downside of this game is that because it is 1v1 format, you should avoid playing it with people who are not gracious competitors. Aka – sore losers. But if you are a couple that loves to measure up against each other, trash talk, and get a rise out of besting each other every now and then, (are you starting to see what kind of couple Maggie and I are?) I can’t recommend it enough. It’s all the comic characters you grew up with battling it out on your screen and it’s awesome. The game is available on Xbox 360, PS3, with an ultimate edition on PS4.

: Maybe puzzles or fighting games aren’t your thing.  If you are looking for something a little bit more straight forward with guns, LOTS of guns then I would recommend checking out the Borderlands series.  Specifically Borderlands 2.

Borderlands revolves around “Vault Hunters” who are adventurers searching for treasure and come across a wide variety of enemies.  The game is a first person shooter focusing on open world exploration, shooting almost everything that moves and upgrading your character. That means each players gets to make some choices that work for them.

This game does fall into a “hardcore” type of playing as a result of the fast paced action, requiring players to aim, shoot, and move all at the same time.  It is a blast to play with a friend, and even more so when you fully upgrade your character to use their specific special powers, including the option of turning invisible. This game often makes the list for best 2-player games, even for more novice players.

That’s all for now, there a plenty of other co-op games out there and we barely scratched the surface here. If you really like these types of games check out Co-Optimus, which is a video game review site that specializes in co-op games. If you want other sources of gaming news I’m a fan of technobuffalo.com and venturebeat.com’s games channel. Happy gaming!