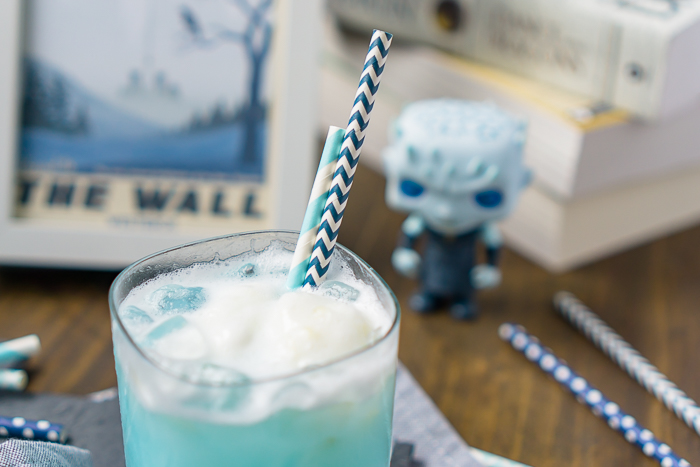 I am back again with another Game of Thrones recipe, and this time it’s an Ice Dragon Cocktail Recipe for the Ice Dragon we have been waiting for! Ice Dragons has been one of the main theories for the show so it was awesome to finally see Viserion come back to life with those bright blue eyes last week! 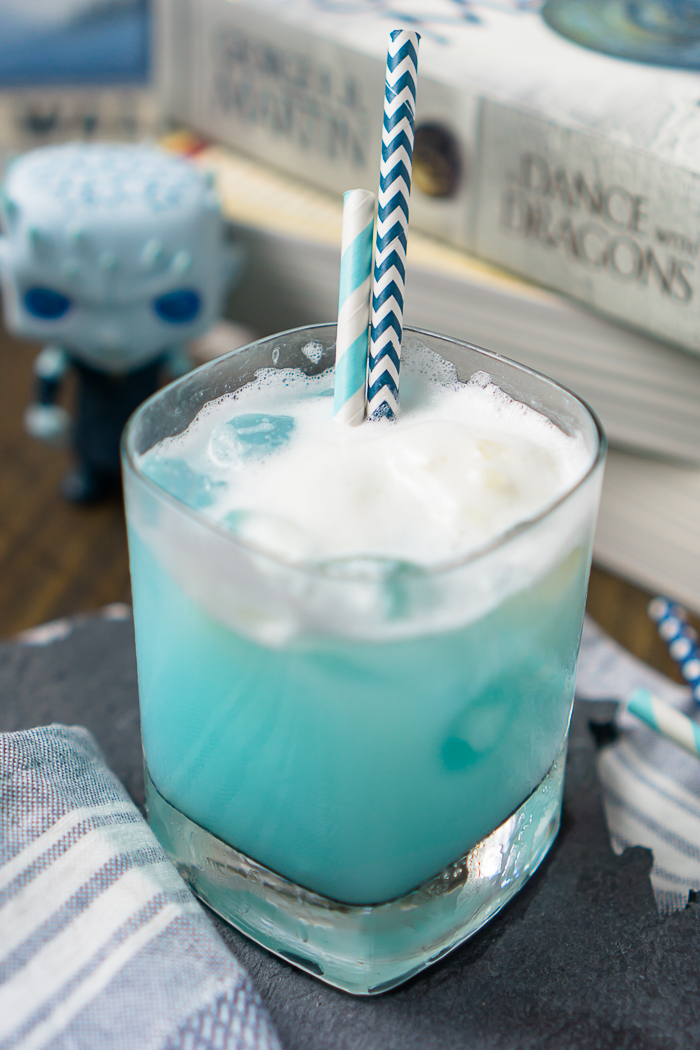 Before last weeks episode, I had a strong hunch that we were finally going to see a White Dragon on screen (or would it be a Wight Dragon?).

Bryan hates when I tell him my theories because I’ve often been right when I have a strong feeling, so while I refrained at first, he kept nagging me until he figured it out. He kept saying, “How could it get worse than Jon or Dany turning into a Wight?”

Ice Dragon is definitely much scarier in my opinion and definitely raises the stakes for the battle with the Night King. I also think this Ice Dragon leads us to the Wall finally coming down because I’m convinced it is coming down tonight! 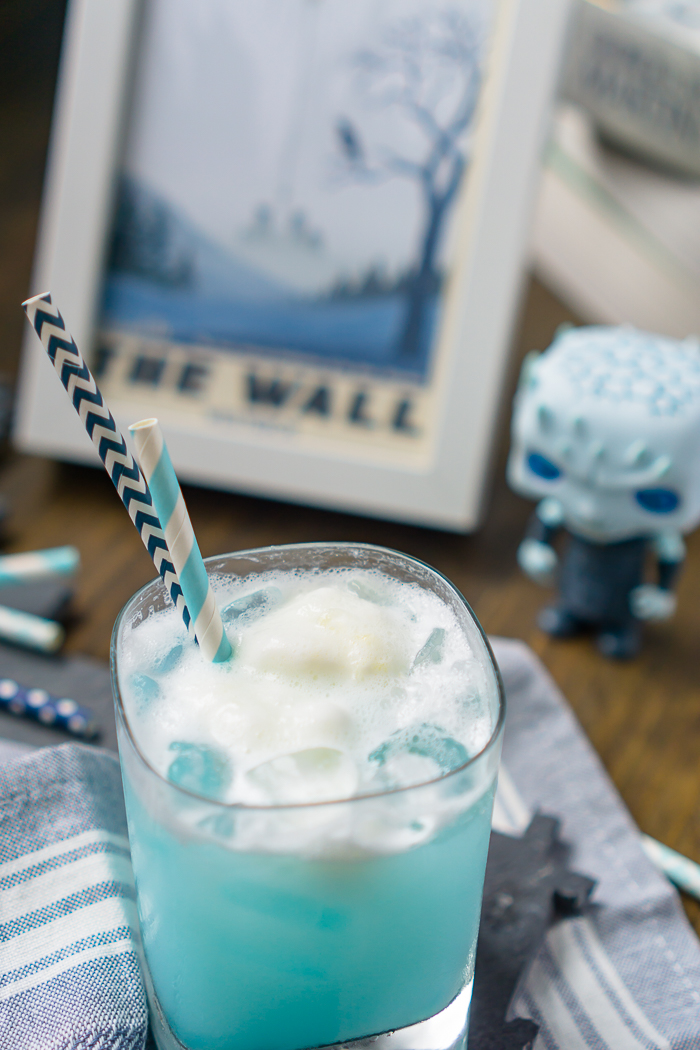 Ice Dragons make an appearance in the novels A Song of Ice and Fire as well; they’re said to roam the Shivering Sea and White Waste. Jon also mentions recalling stories from Old Nan about the ice dragons as a child.

While they are also described as much larger in the books with translucent wings which is causing some people to say that, “No, Viserion is NOT an Ice Dragon”, I think we can assume the tv series is taking liberties with the idea of an Ice Dragon. It’s far more dramatic to turn one of Dany’s children into an Ice Dragon instead of having a new creature appear from off story.

We did get the pale crystal blue eyes as described in the book series, though, and I’m sure we will see his freezing breath soon! 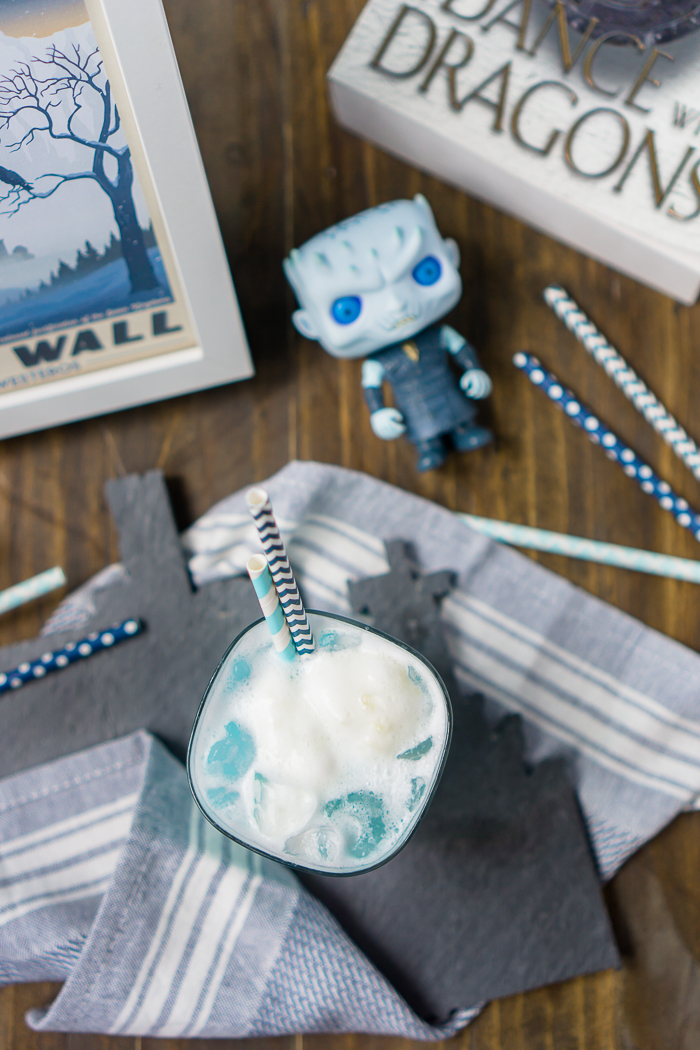 If you decide you really want to deep dive into the work of George R.R. Martin, he also published a children’s novel back in the 80s called Ice Dragon. While similar in some ways, Martin has refuted that this earlier work is in the same world as GOT. But clearly, Martin cannot stay away from Ice Dragons!

Now, back to our Ice Dragon Cocktail which is my fourth Game of Thrones Recipe!

I am not normally one to make too many UV Blue Cocktails, but I think the citrus from the Pineapple Sherbet is the perfect balance for the sweetness of the UV Blue. It’s cold, bubbly, and a tasty nod to the blue ice of the Ice Dragon and White Walkers. 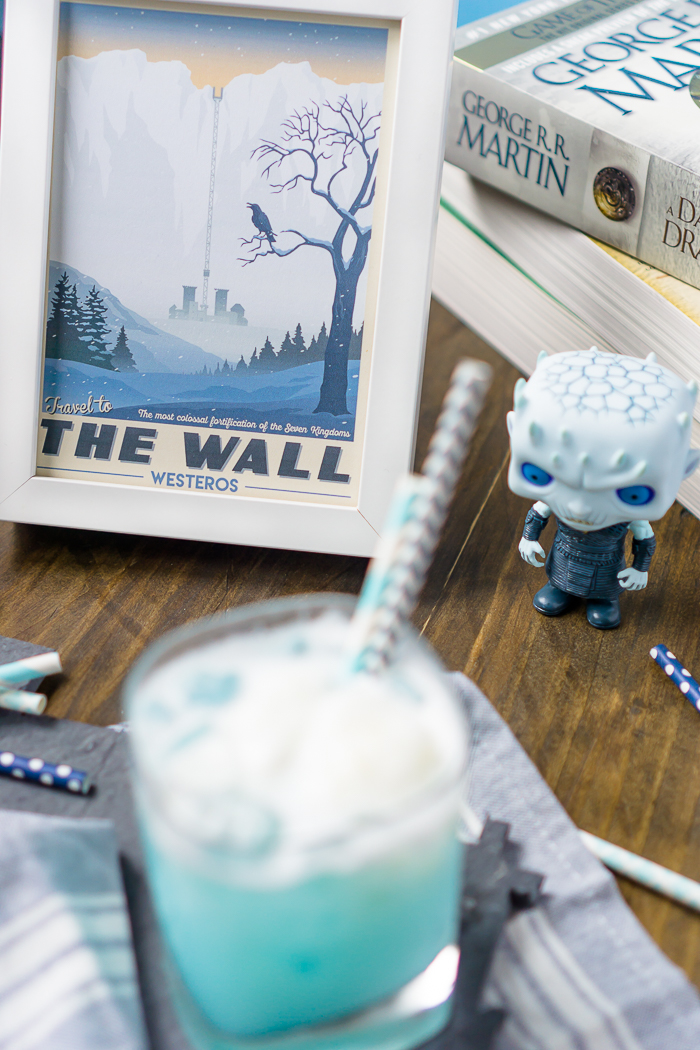 ARE YOU A CRAFTY GAME OF THRONES FAN? THEN YOU MIGHT LOVE MAKING YOUR OWN DIY GOT SHIRTS!

If you love making DIY gifts for your nerdy fandoms, you will want to check out my shop filled with nerdy SVG files, such as my Game of Thrones Bundle or my Targaryen Stark 2020 Presidential design!

With these SVG Files, it is easy to upload to a Cricut, Silhouette, or other electronic cutting device to make any project you want! Plus, I provide the PDF and JPEG files that would allow you to make Game of Thrones Party Decor or Invites.

YOU MIGHT ENJOY THESE OTHER GAME OF THRONES INSPIRED RECIPES:

ENJOY SIPPING THIS ICE DRAGON COCKTAIL AS YOU WATCH GAME OF THRONES!

Skip to Recipe
Send this to a friend