Welcome to The Love Nerds’ Avengers Week and Marvel Comics 101 – Tips on where to start reading Marvel Comics! 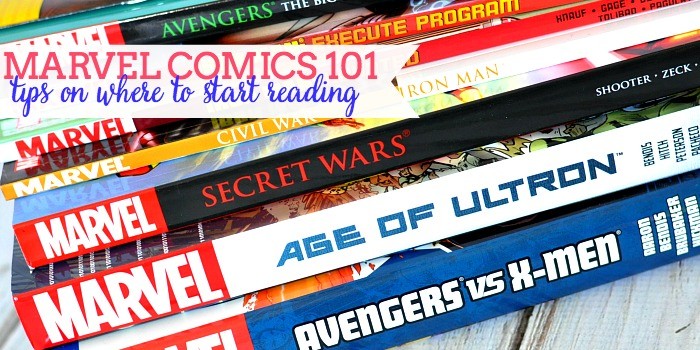 If you’ve been following along here, you have probably heard me mentioned. I’m Bryan, the other half of the Love Nerds. When I met her back in college, she was just “Maggie” – not “Love Nerd Maggie”, but I have loved watching her amazing blog grow and am really excited that she asked me to write a post for Avengers Week. 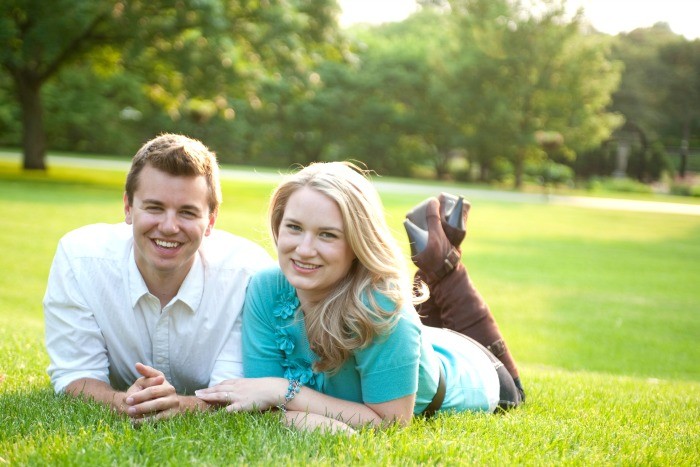 Part of the reason I am so excited to be posting here is because back in the day I used to blog regularly at a video games news site called Kombo.com, editorializing about video games and reviewing the latest titles to hit the shelves. My nerdy interests extend far beyond video games, though. In fact, between Maggie and I, we have more nerdy hobbies than our friends can probably count.

So what am I doing here today? Writing about comics during Avengers Week and giving you all a brief Marvel Comics 101 before “Avengers: Age of Ultron” comes out this week. Have I mentioned how excited I am about this movie?! 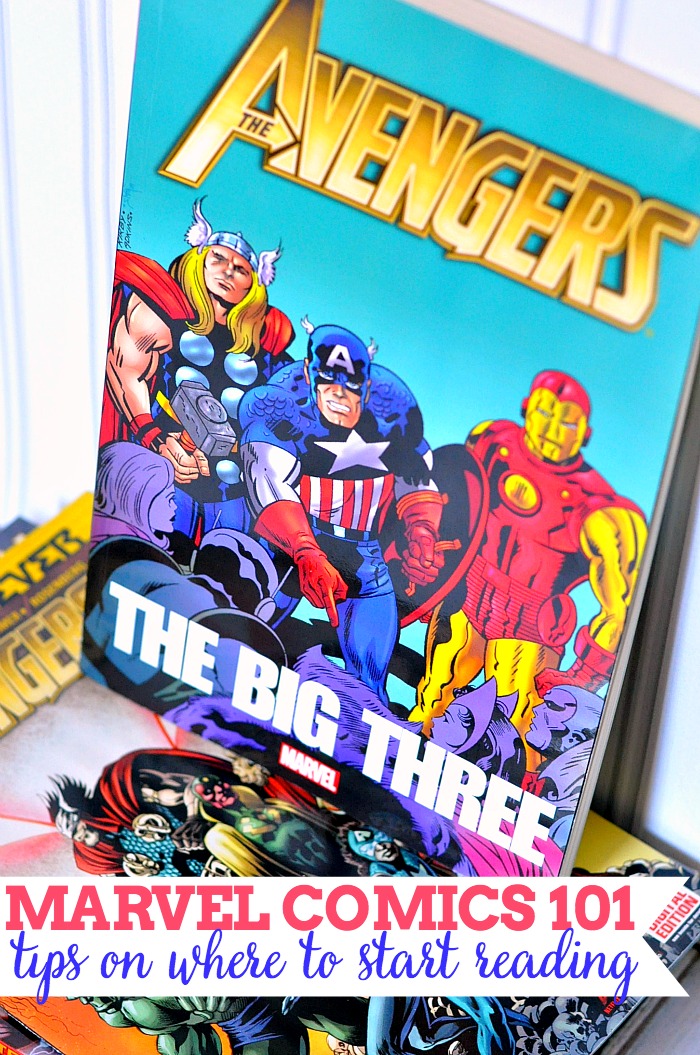 I got into comics at a very young age. One reason was because of the awesome Spider-Man and X-Men cartoons of the early 90s (which Maggie also watched growing up) but really it was because I had an extremely difficult time learning to read. While I didn’t know at the time, I have Dyslexia and reading was one of my biggest challenges as a kid.

Comics were the perfect bridge for me to learn how to read. It was also one of the only times that I didn’t struggle with understanding a story on my own because the colorful splash pages that I read in comics like Spider-Man would communicate so much to me with only a few words. And let’s be honest, the coolness of your parents reading to you wears off when you enter middle school.

I read adventures from Spider-Man to the X-Men and then the Avengers. It’s cheesy, but comics have a special place in my heart because those colorful heroes jumped out of the pages for me and helped me overcome the biggest foe to me at the time – reading. 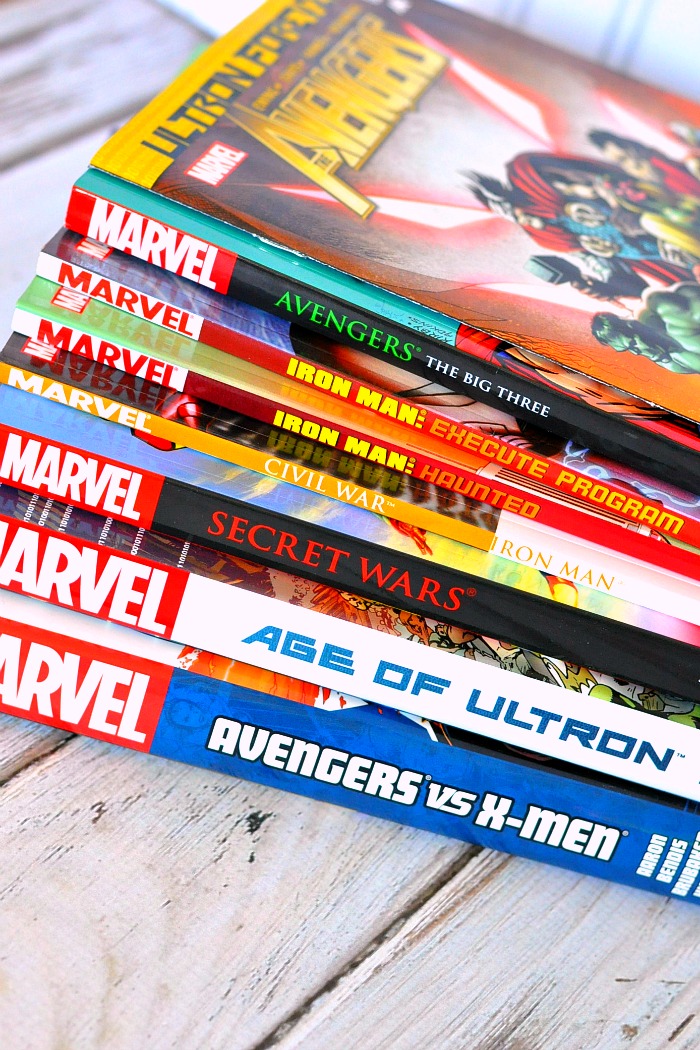 As a result, I read a lot of comics as a kid and still do to this day. As a grown adult with a full time job and a wife, I still love comics. I am absolutely gripped by them. I think it’s one of the most creative ways to tell a story since it seamlessly mixes both literary stories with compelling artwork. You truly cannot have one without the other in a comic.

So, if you or your child are interested in knowing more about the Marvel World and the Avengers but you aren’t sure where to begin, I am hoping this post will help! A lot of people get intimidated because there are over 50 years worth of comics to read from, but if you just follow my lead (and the rest of this blog post), I think you will leave with some great titles that you will really enjoy.

The Avengers was one of my favorite super hero teams growing up and still is today because of how different each Avenger’s power was. It was always fun to read how they would team up to take down a foe together and how they struggled to overcome their differences. If you fall into the camp of “I watched the movies but now what…” then Avengers: The Big Three

is a great place to start.

This book is a collection of 7 stories that feature the core 3 Avengers: Captain America, Iron Man, and Thor. The book is a great primer for any other Avenger stories within the comic book universe because it compiles all of the early adventures of the The Big 3 and it dives into the modern day stories a little, too. You will also see Scarlett Witch and Quicksilver appear – new characters in The Avengers: Age of Ultron – and get some fun alternative universe versions of the characters.

If you aren’t into collections or want a really cohesive story, I would recommend AVENGERS: ULTRON UNLIMITED

, which is a fun take on the upcoming movie’s villain.

If you are over robots right now, I recommend The Ultimates Collection

, which is a modern day version on the Avengers with the tone and writing close to what people have seen in the movies.

If you are a fan of the movies, you most likely got into the Marvel Universe by seeing Tony Stark split the skies with his suit of armor. For this very reason Iron Man is one of my favorite comic book characters. The guy could make a flying suit out of almost anything and he is just flat out cool. Over the years, he has been quite the complicated character, sometimes playing hero and anti-hero. He is always good for some action, cool armor, and humor, though.

I think the best interpretation of these elements is seen in Iron Man: Extremis

. People who are familiar with the movies may be familiar with “Extremis” technology, but the books take the ideas in a much different direction. I am also a huge fan of the art work done by Adi Granov, which is gritty and bold.

enough. This is for people who want to see a pretty straight forward story of explosions, action, and armor!

Captain America is easily my favorite comic book hero and almost favorite hero ever (only to be outdone by Luke Skywalker from Star Wars, but that’s a whole other post). I love how Captain America’s power wasn’t always physical dominance from the super soldier serum, but the way he was able to see different perspectives, lead a team of different people, and inspire others to do good. I’ve always enjoyed Captain America stories which have him a part of team, but there are a few standalone stories I really enjoy.

. If you want to get to know the Captain America mythos a little better beyond what you have seen in the movies, this is for you. Cap is once again at odds with Red Skull, but with a giant conspiracy involving the rebirth of Hitler, the underground Nazi party (stick with it, trust me), and the usage of the cosmic cube. No one said comics couldn’t get a little out there.

. Disclaimer: the events transpire very differently in the graphic novel than how they did in the 2014 movie, so it’s worth a read if you want to check it out. Plus you also get Agent 13, love interest to Cap and the “nurse”/SHIELD Agent from the movie.

Looking for something a little toned down? Maybe a story that’s a bit more relatable than a man who can make a suit of armor in a cave and a guy who was injected with a serum to be a super hero? Then Clint Barton – AKA Hawkeye – is your man. Hawkeye is the “everyman” within the Marvel Cinematic Universe as well as the comics. Check out Hawkeye, Vol. 1: My Life as a Weapon

, written by Matt Fraction, which recently wrapped it’s run. I recommend this book to anyone whether they are a Hawkeye fan or not, since the writing is superb and the title has made me laugh out loud on many occasions (Maggie gets annoyed when I laugh at books while she is trying to sleep but it’s totally worth it).

HOW ABOUT SOME DIVERSITY?!

Now if you have noticed, the above titles I have recommended have been all about big, strong, white dudes. While Scarlett Witch, Black Widow, and Maria Hill are all in Age of Ultron, there isn’t a definitive story that I can recommend that would do any of those female characters justice (If there are any comic book nerds reading this, please feel free to share some suggestions below in the comments).

So what if you want something with – oh I don’t know – a woman? Or just diversity in general?

This is my favorite ongoing title from Marvel right now: Captain Marvel

. Captain Marvel is a card carrying Avenger in the comic universe who can fly, shoot lasers out of her hands, and is basically indestructible. Plus, you can be ahead of the curve as you will see a movie in 2018 of Captain Marvel.

, which places Sam Wilson – AKA “The Falcon” who you met in the movies – in the shoes of the star spangled Avenger. Besides, what’s better than Captain America? A Captain America that can fly.

While she isn’t an Avenger yet, I have no doubt one day Kamala Khan AKA Ms. Marvel

. Yes. She is different from CAPTAIN Marvel. Ms. Marvel is a current series depicting a female Pakistani born teenager from New Jersey who is exposed to a “terrigen mist” (Agents of Shield fans, you know what’s up!), which grants her extreme powers. This is a great title for teenagers and adults alike as we can all see a little bit of ourselves in Kamala as she grapples with teenage troubles. The title is also just plain funny and an easy read.

Lastly, reading comics is supposed to be fun! Many people get caught up letting others tell them what titles are “garbage” or “for kids”. Don’t get caught up trying to figure out if you are reading “the right” comics, just read what is right for you. Read what you enjoy! The beauty of the comic universe is that events are always in motion and unpredictable. You never know who is dead, who will be alive that was dead, and who is plotting the next scheme, which means there is always something to look forward to.

Can you believe that this only an introduction to Avengers comics from Marvel with how long this post is?! Happy reading!